Leonardo da Vinci resting on the campus of the University of Nevada, Reno

A giant head lies on the snow-covered lawn between the Virginia Street parking garage and the Mathewson-IGT Knowledge Center: the head of a Giant of the Renaissance, Leonardo da Vinci [1-3]. This larger-than-life sculpture is made out of  diverse materials (concrete, bronze, metal, glass). The snow above the beard is temporary; it's not left-over shaving foam. As I understand, Leonardo never shaved. He did not portray himself, but every portrait made by other artists shows him with his magnificient flowing beard [4]. And now here it flows on a Nevada campus about halfway-around-the-world away from Leonardo da Vinci's original places of creativity.

Although Leonardo was interested in both body and mind, this sculpture by artist Mischell Riley and her team wants to highlight the mind. The title of this sculpture project is “Inside the Mind of da Vinci.” The back of the head allows you to walk into the open head and get in touch with its inner sides, which reveal etchings of Leonardo's sketches and writings; a section of which is shown below. 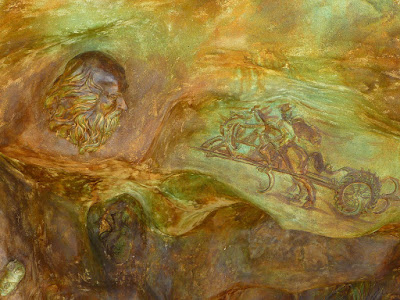 The da Vinci head had its debut in the desert: at the Burning Man 2016 event, which had its art theme inspired by the Italian Renaissance [5]. A flyer next to the sculpture outlines further details and the travel route of the head:

Fresh off the playa of Burning Man 2016, this larger than life sculpture head of Leonardo da Vinci weighs seven tons and is made of concrete, bronze, recycled glass and metal. Walk behind the sculpture to view some of da Vinci's sketches and writings and draw inspiration from this famous polymath. Imagine what your mind can do! Artist Mischell Riley created the sculpture prototype using 3D scanning and print to-scale modeling in the DeLaMare Science and Engineering Library. Inside the Mind of Da Vinci was unveiled at the Mathewson-IGT Knowledge Center on November 17, 2016. The exhibit will move to a permanent home in Carson City in May 2017.


Seven tons of head. Maybe one ton of beard? And a weigh-less mind that still creates heavy impacts on the flows and directions of our current endeavours in the arts and sciences.